The Columbus Design Institute is kicking off an online workshop today aimed at the mayors of five Indiana cities, to help improve their Main Streets and downtowns during the pandemic.

According to the Landmark Columbus Foundation, the Columbus Design Institute is an initiative to promote the value of good design in the sustainable and equitable development of cities. The institute was one of three throughout the country to hold a regional session last year for the Mayor’s Institute of City Design, hosted through the U.S. Conference of Mayors.

The mayors of Columbus, Shelbyville, Elkhart, Zionsville and Warsaw are taking part in the workshop today through Dec. 10th. Each mayor will be able to work with a team of design experts from around the country to learn about national trends and to have a workshop on their own community’s design challenges.

You household income has to be less than twice the federal poverty guidelines to qualify and you have to be getting health insurance through a marketplace Silver Plan or Indiana’s HIP Plus plans. Alicia Monroe with the United Way says the Premium Link program is meant to keep cost from getting in the way of people’s health care.

You can get more information by calling 812-314-2960 or emailing premiumlink@uwbarthco.org. The deadline to sign up is December 15th.

Bartholomew County officials want to get your thoughts on the availability of broadband internet in the rural areas of the county.

Tony London, incoming county commissioner and head of the county’s new broadband initiative, said he has been working with Purdue University and others to develop the study.

London said he is working with Purdue’s Dr. Roberto Gallardo, who literally wrote the book on broadband internet in rural Indiana.

The initiative will help identify underserved areas of the community and work to attract service providers to offer expanded service and higher speed in those areas.

You can find a link to the survey here.

The city of Seymour is urging its residents to take the COVID-19 pandemic seriously and to take appropriate precautions.

Yesterday, in the wake of Jackson County turning red on the state’s color-coded COVID-19 map, Mayor Matt Nicholson’s office sent out a release, urging people to wear a mask, to wash you hands, to keep six feet of distance between yourself and others and to consider postponing large holiday gatherings until it is safe to have everyone together again.

According to Seymour city officials, it is about protecting the people who keep our communities going. They say hospitals in our region and across the state are taxed and their capacity to care for patients is in serious jeopardy.

Jackson County showed the highest COVID-19 positivity rate in the state yesterday, of 19.4 percent. That means one in five residents who were tested were positive for the disease. According to the city, the 1,251 infections reported since early November is a 96 percent increase over the previous eight months combined. 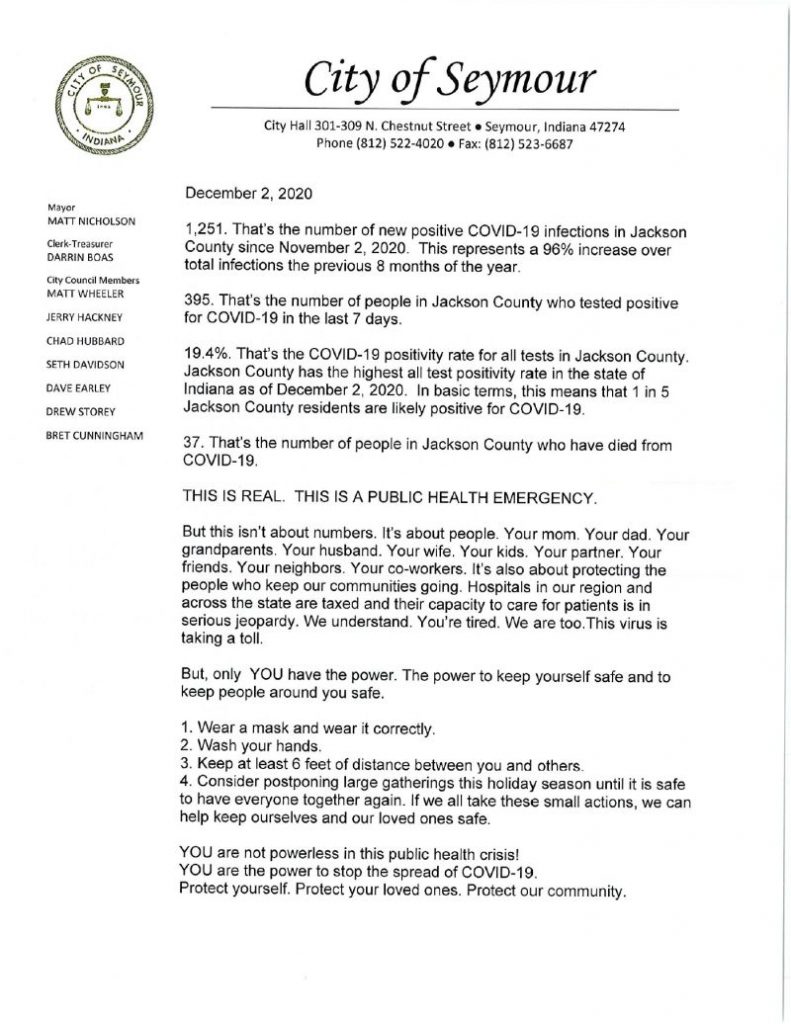 Parts of southeastern Indiana are turning red on the state’s color-coded map of COVID-19 spread.

Jackson County reported three deaths from the disease, Johnson and Shelby counties are both reporting 2 new deaths from COVID-19, with one new death in Decatur County.

You will see higher dumping fees at the Bartholomew County Landfill, starting after the first of the year.

Jessica Norcross, with the Bartholomew County Solid Waste Management District explains that the current rate of $27.50 per ton will increase to $30 per ton, an increase of $2.50 per ton.

That will go into effect on January 2nd.

Norcross said that dumping will remain free for loads that are less than 200 pounds. That is up to one load per day.

The Bartholomew County Landfill is on County Road 450S. It only accepts trash and recycling from Bartholomew County. If you have any questions, you can contact the Solid Waste Management District at 812-376-2614.

A pickup truck driver lost control and plowed into a home on Flintwood Drive Tuesday morning.

Columbus police say that 54-year-old Denise L. Bruton was driving east on Chapel Drive at about 11:30 Tuesday morning when she had a brake problem and couldn’t stop, she told police. The vehicle continued across Flintwood Drive into the home. There were residents inside, but no one was hurt.

Bruton was cited for Driving While Suspended with a Prior Conviction and Operating a Vehicle Without Insurance.

The crash remains under investigation.

35-year-old James C. Gholson of Elizabethtown was arrested today after a six-month investigation by the Indiana State Police Special Investigations Section. He served as deputy from February until the start of the investigation in June.

The investigation began after allegations  were made against Gholson for allegedly defrauding insurance companies. Troopers say that Gholson owned an oxygen supply business and in February 2018 reported a theft of oxygen equipment from his home. He was reimbursed more than $187,000 by insurance companies for the claim.

In April of 2019, he again reported theft of oxygen equipment from his home and was reimbursed more that $66,000. Troopers say Gholson allegedly forged invoices showing he had purchased the equipment in the first place and created a false police report of the theft. At the time, he was a reserve deputy on the sheriff’s department.

In November of last year, Gholson again filed a false insurance claim, police say, this time claiming that he had a trailer with two mowers stolen from his home. A fake police report was again generated along with a false title for a trailer.

A warrant was issued for Gholson’s arrest Monday on charges of insurance fraud, official misconduct and forgery. He was arrested without incident today.

Police arrested a bleeding man yesterday after he injured himself while allegedly breaking a window at a vacant Columbus business.

Columbus police report that they were called to the 200 block of North Gladstone Avenue at 7:30 a.m. Monday morning about a man breaking out the window. 24-year-old Entony Rodriguez of Columbus was found in a vehicle nearby. Police say that he was bleeding from a large cut on his back.

Indiana health officials are reporting 142 new deaths from COVID-19 in Tuesday’s numbers from the Indiana State Department of Health.

That is a record number for a single day’s report, However those deaths date back from Oct. 27th to Monday. The high number is in part due to reporting delays over Thanksgiving.

Bartholomew and all of its surrounding counties remain orange on the state’s color coded metric map, meaning serious spread of the disease.