The severe thunderstorms that came through the area this afternoon have left thousands without power in south-central Indiana.

The National Weather Service issued a series of severe thunderstorm warnings just before 4 p.m., including a tornado warning for parts of Shelby and Rush counties, which expired at 4:30 p.m.  Residents across the region are reporting trees down and up to 70 mph winds.

The Columbus Fire Department is reporting a high volume of calls for service, many related to powerlines down on roadways or on private property. For your safety, firefighters urge you to stay away from any downed powerlines. A downed powerline may still be energized and could cause electrocution.

INDOT says that Interstate 65 was closed north of Columbus due to an overturned semi but that has one lane reopened.

Columbus police say that they are directing traffic at several locations where the power is out and they have responded to several weather related calls including crashes and downed trees.

The Bartholomew County Sheriff’s Office is asking area motorists to drive with caution this evening and to stay home if you can. The sheriff’s department also warns that if a traffic light is out or flashing red it needs to be treated as a stop sign.

According to the sheriff’s department, the Taylorsville area was hit especially hard. The department reports that it has called in several deputies  to handle the increased call volume and they are working  through the calls for service and request patience from the public.

The National Weather Service reports that the storms have mostly moved out of central Indiana. You can expect showers and thunderstorms this evening into Sunday morning. 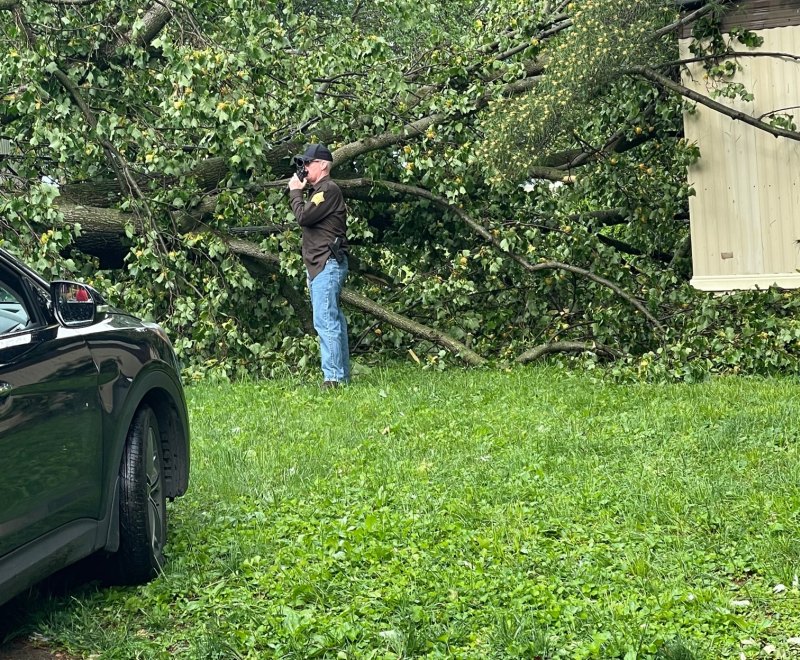 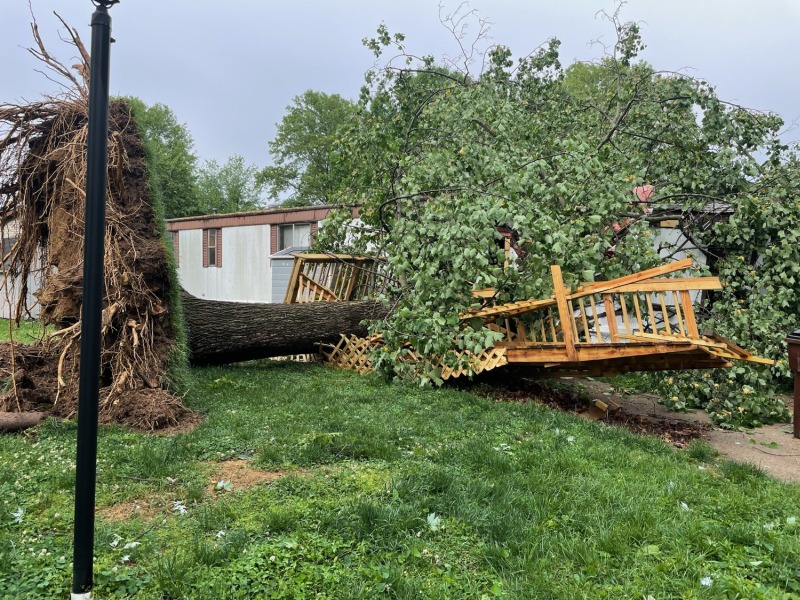 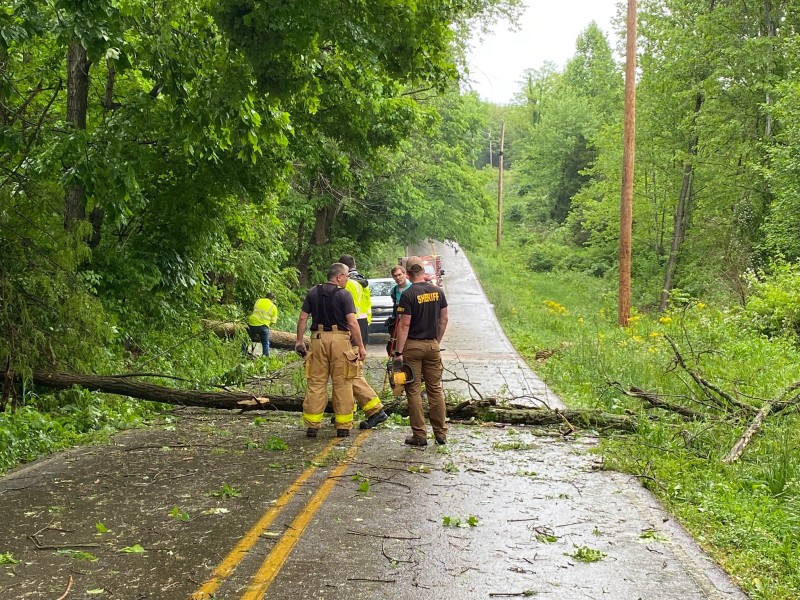 Malana Kramer of Greensburg Community High School was chosen as the winner of the competition. Local artist Rick Wilson served as the judge for the artwork submitted by students in the district.

Each spring, a nation-wide high school arts competition is sponsored by the Congressional Institute to recognize and encourage the artistic talent throughout the nation.

The runner-up is Ajay Singireddy of Columbus North High School, who’s artwork will hang in Congressman Pence’s Washington D.C. office for one year along with the art of 2nd runner-up Savannah Keith of Austin High School.

Pence thanked all of the students who took part, saying “These students’ art is nothing short of amazing and their artistic ability is astounding.”

A Columbus man is accused of pointing a gun at another person in an April incident in southern Johnson County.

According to Johnson County Sheriff’s Department reports, deputies were called to the area of U.S. 31 and County Road 400S at about 9:34 p.m. in the evening on April 25th after a driver reported that she was followed by a black SUV from Columbus, on the interstate and then onto county roads. When she stopped at that location, a man got out of the vehicle holding a gun and fired several shots at her vehicle, which passengers of her vehicle also witnessed.

Deputies later talked with residents in the neighborhood who had video of the incident and authorities were able to put together a description of the SUV. A further search through camera footage revealed the owner of the vehicle was the father of 18-year-old Kaden M. Marsh of Columbus. Investigation and interviews revealed that Marsh had an ongoing dispute with a man who drives a similar vehicle as the victim. Witnesses in the car identified him as the shooter from Facebook photos and a lineup.

Marsh was arrested Thursday night on felony charges of criminal recklessness and pointing a firearm at another.

No one was injured and there was no apparent damage to the victim’s vehicle.

A statewide Silver Alert has been declared for a missing Monroe County man.

The Monroe County Sheriff’s Office is investigating the disappearance of 86-year-old Donald Perkins. He is a white man, 6 feet tall, with blonde hair and blue eyes, last seen wearing a navy blue shirt over a white long-sleeved long john shirt and navy blue sweatpants. He was driving a black 2017 Hyundai Sonata with Indiana plate 615 TJQ.

Perkins is missing from Bloomington and was last seen on Thursday at 8:00 pm. He is believed to be in extreme danger and may require medical assistance.

Daylight is giving folks across southern Indiana a better look at just how much damage last night’s storms did. A line of strong storms rolled across the southern portion of the state last night and early this morning with reported winds of up to 70 mph.

Some areas of south-central Indiana saw as much as two inches of rain last night and more heavy rain early this morning.

More bad weather could be on its way today and into the weekend. The National Weather Service says you can expect thunderstorms tonight through Saturday. A few of the storms could be strong to severe with damaging winds and large hail as the main threats.

Strong southwesterly wind gusts of up to 40 mph are possible this afternoon.

A Columbus man is being accused of child molesting after an investigation by city police.

According to Columbus Police Department reports, officers began investigating a molestation incident at a mobile home park. That investigation revealed the victim had been molested on many occasions over several years.

The Landmark Columbus Foundation is announcing major gifts to support the organization long-term.

Landmark Columbus Foundation is a group that cares for, celebrates, and advances the cultural heritage of Columbus.

You can get more information or view the foundation’s recently released annual report on the web at landmarkcolumbusfoundation.org.

Local law enforcement officers will be holding a memorial service this morning in downtown Columbus to recognize officers who have fallen in the line of duty in the last year.

During the 30-minute long ceremony, the 617 police officers and 21 police canines who died in the line of duty in 2021 will be recognized. Local honor guards and bagpipers will take part. There will also be a 21 gun salute and the playing of Taps.

The ceremony will be held at 9 this morning at the Public Safety Plaza at Second and Jackson Streets in Columbus.

The event is free and you are invited to attend.

A traffic violation and expired license plate led to a Columbus man’s arrest on drug dealing charges this week.

According to Columbus Police Department reports, officers stopped a vehicle near 12th and Sycamore streets at about 9 p.m. Wednesday night for a minor traffic violation. But officers also discovered that the license plate was expired.

Police conducted an inventory of the vehicle before having it towed and the search revealed methamphetamine, heroin, marijuana and fentanyl inside. Police also found drug paraphernalia including smoking devices, scales, cash and a replica rifle in the vehicle.

The driver, 28-year-old Jesse S. Woolsey was arrested on preliminary charges of dealing in a narcotic and in more than 10 grams of methamphetamine, along with possession charges for the meth, narcotics, a legend drug, marijuana and drug paraphernalia.

The last public food distribution event for the Columbus East Food Pantry is set for this afternoon.

The drive-through food distribution will be from 4:30 to 6:30 p.m. at Door 31 in the west parking lot behind Columbus East near the tennis courts. There will be enough food for about 200 families but due to strong demand, you can only pick up two collections of food per car. Columbus Animal Care Services will also be distributing limited amounts of pet food.