There is still time to vote in person in Bartholomew County.

There is one early voting location at Donner Center open until 5 today and from 8 a.m. to 5 p.m. on Saturday.

You can also vote from 8 a.m. to noon on Monday morning at Donner Center. The primary election is Tuesday and you can cast ballots at one of 8 vote centers in the county from 6 to 6.

Bartholomew County has reached a new landmark for COVID-19 cases confirmed in the county.

According to the most recent update from the Indiana State Department of Health,Bartholomew County has 500 confirmed cases and there have been 34 deaths from COVID-19 in Bartholomew County.

Statewide there are 33,558 total confirmed cases of COVID-19 in Indiana, an increase of 521 cases since Thursday’s report.

There have been 1,946 deaths in Indiana as of this afternoon’s update, an increase of 40 deaths from the previous numbers.

Our Hospice of South Central Indiana is announcing that it will not be holding its annual Wings for the Journey memorial service this year. It was originally scheduled for June 14th.

Laura Leonard, president of the hospice, said the agency feels a responsibility to minimize the exposure of others and to reduce the spread of the coronavirus. She said they still hope to hold their annual December memorial event.

Wings for the Journey is an ongoing and open support group for anyone who has experienced the death of a child.

According to the most recent update from the Indiana State Department of Health, there are 33,068 total confirmed cases of COVID-19 in Indiana, an increase of 646 cases since Wednesday’s report.

There have been 1,907 deaths in Indiana as of Thursday afternoon’s update, an increase of 37 deaths from the previous numbers.

Lauer said the the pandemic brought a financial burden to communities including medical supplies and testing centers. The relief funds are to help offset their unexpected COVID-19 related costs.”

Indiana allocated $300 million in federal funding from the Coronavirus Aid, Relief and Economics Security, or CARES Act to counties and communities for reimbursement. Lauer said the funding cannot be used to replace lost tax revenue.

The Indiana Finance Authority is in charge of guidelines on how each county, city and town can use the funding.

Columbus tenant restaurants in The Commons and the city-owned parking garage on Fourth and Jackson Streets will see a break in their rent through the end of the year. The Columbus Redevelopment Commission agreed to a proposal to continue to not charge rent to its businesses tenants in June and July and to only charge 25 percent rent for the rest of the year.

Heather Pope, director of redevelopment for the city, explained that the downtown restaurants are an essential element of making the area vibrant and attractive for redevelopment efforts.

Several of the business owners expressed the difficulties they are facing include a huge drop in revenue and increased costs from takeout service.

Steve Leach with the Garage Pub and Grill says that is heartbreaking to the business owners to have to ask for help:

Leach praised the partnership between the city and the tenant restaurants that has helped revitalize downtown Columbus.

A Columbus woman is facing drug charges after a traffic stop Wednesday night.

Columbus police say they pulled a vehicle over near 17th and Franklin streets at about 7:30 last night for a minor traffic violation. A police dog alerted to the smell of narcotics in the car and a search recovered methamphetamine and drug paraphernalia including three digital scales and smoking pipes.

The driver, 35-year-old Sasha S. Penrose of Columbus is facing preliminary charges of possession of methamphetamine and of drug paraphernalia

Ethnic Expo will not be held this year in downtown Columbus.

Mayor Jim Lienhoop made the announcement today that the multi-cultural event, originally scheduled for Oct. 9th and 10th, has been canceled.

This would have been the 37th year for the downtown festival.

Lienhoop said that organizers “want to ensure that we are not putting our residents, neighbors, and our most vulnerable at risk. It was a difficult decision to not hold Ethnic Expo this year, but we want to be responsible in keeping the community safe.”

First Financial Bank has been the presenting sponsor of the event for the past 10 years.

Tuesday is primary election day in Indiana and early voting is underway in Bartholomew County at Donner Center.

The vote center will be available from 8 a.m. to 5 p.m. through Saturday, and then from 8 a.m. until noon on Monday.

Most Bartholomew County voters will be deciding on a referendum for Bartholomew Consolidated Schools to raise teachers’ pay, as well as the Democratic candidates for this fall’s Statehouse race and Republican races for Superior Court judge, County Commissioner and County Council at large.

Bartholomew County Democrats have one contested race on the ballot, for the statehouse seat that represents most of the county and Columbus. Dale Nowlin and Cinde Wirth are running to challenge incumbent State Rep. Ryan Lauer in November.

Hope will be honoring Hauser High School’s graduating seniors Friday afternoon with a parade through the town.

Aleesa Dickerson, the school’s ag teacher and FFA advisor is helping organize the event. She said that the Class of 2020 has missed out on so much, that organizers wanted to recognize them for their accomplishments.

Dickerson said that the former students she has talked to have seemed excited and plan to participate.

Dickerson has encouraged the graduates to wear the prom dresses or sports uniforms that they never got a chance to wear this spring.

The in-vehicle parade will form up at the High School with a start time of 5 p.m. Students should be one per car and should not be driving so they can wave to the well wishers, Dickerson said.

Those wishing to watch the parade should line up in their vehicles along the parade route which heads up Elm Street, along Jackson and around the Town Square before ending at the Community Center. 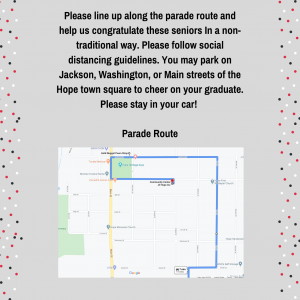