The newest Columbus firefighter was sworn in this week by Columbus Mayor Jim Lienhoop.

22-year-old Austin Miller is originally from Indianapolis and graduated from Franklin Central High School and Ivy Tech Community College with a degree in fire science. He is certified as a basic emergency medical technician and firefighter I and II. Previously he worked for Seals Ambulance service and the Bargersville Fire Department.

Miller will go through a Columbus Fire Department orientation and training program, then will be assigned a station and a shift.

Authorities are warning that roads are extremely slick this morning. Indiana State Police are reporting multiple crashes on Interstate 65 tying up traffic in the area and numerous accidents on surface streets. Bartholomew and Brown counties have declared travel advisories.

You could see some hazardous road conditions, especially on side streets, less-traveled roads, bridges and overpasses. You are asked to be cautious and be prepared to slow down during your morning drive.

Our area of the state is one of the few places in Indiana NOT under a winter weather advisory later today. Bartholomew, Brown, Decatur, Jennings and Jackson counties are part of a narrow band that is not under the advisory affecting the rest of the state.

Areas under the advisory, to both the north and south of us, are being told to expect snow and sleet accumulations of up to three inches and a glaze of ice. The advisory is in effect from 1 p.m. this afternoon through 4 a.m. Friday morning.

Driftwood River at Edinburgh remains under a flood warning through Friday morning according to the National Weather Service. The river appears to be cresting this morning at less than a foot above the 11 foot minor flood stage level and should drop out of flooding altogether by this evening.

A flood warning also continues for East Fork White River in Seymour through Monday morning. The river appears to have crested and is at 15.72 feet this morning, just over a foot below the moderate flood stage. The river should drop back below the flood stage by Sunday afternoon or evening. 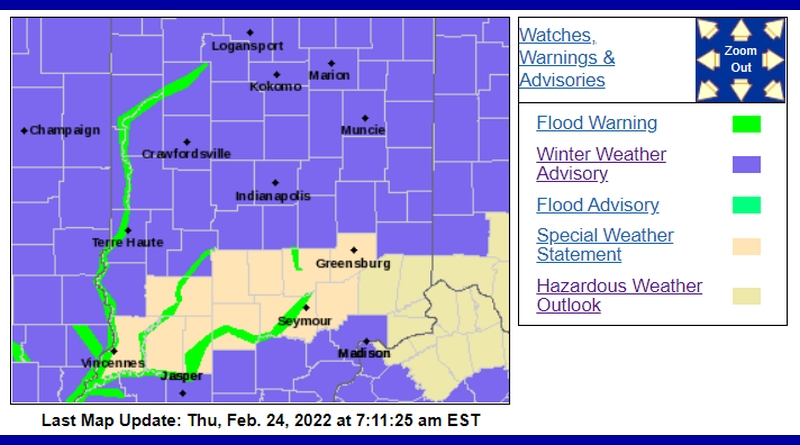 A Jackson County man has been arrested on firearms and intimidation charges after firing a shotgun during an argument with his stepfather Monday.

According to reports from the Jackson County Sheriff’s Department, deputies were called to the 10000 block of East County Road 50S at about 10:14 a.m. Monday morning, when a mother called to say her adult son was out of control and had fired a gun outside the home. Police say the son, 51-year-old Chad E. Hatton of Seymour had been arguing with his 79-year-old stepfather and shoved the older man to the ground. The stepfather pulled a small pistol in self defense. He said Hatton fired at him, said he would kill him and forced him to discard the pistol.

Hatton left the scene but was pulled over by an on-duty community corrections officer near County Road 80N and U.S. 31. Police discovered a rifle in the passenger seat and Hatton was taken into custody.

Indiana Conservation Officers used firearms-detecting dogs at the home to find the shotgun hidden in the woods, buried along with shotgun rounds and wadding, and the pistol the stepfather had been carrying.

Hatton is facing charges of possession of a firearm by a serious violent felon, intimidation with a deadly weapon, pointing a firearm, criminal recklessness and battery.

Three Columbus firefighters are being recognized for their heroism after a fire earlier this month at Williamsburg Court Apartments.

According to the fire department, Lt. Rick Mullis and firefighters Derrick Chitwood and Eric Green were among the  first on scene at the Feb. 2nd fire in a basement apartment. Witnesses said they could hear a man inside calling out for help from inside the locked apartment.

Firefighters breached the locked apartment door and encountered heavy smoke and heat. About two feet inside the door a thermal imaging camera revealed an unconscious man on the floor. After pulling him to a stairwell, Columbus police helped carry the man outside. Columbus Regional Health paramedics transported him to the hospital for treatment.

The victim was treated for burns and smoke inhalation injuries. The man was ultimately release from the hospital and continues to recover from his injuries.

The Columbus Fire Department presented the Medal of Valor commendations to the three firefighters at Tuesday’s Board of Public Works and Safety meeting at City Hall.

Edinburgh is partnering with the National Safe Haven Alliance to make it safer and easier for someone to deliver an unwanted infant to authorities with no questions asked.

Police Chief Doyne Little says the town, the police department and the fire department are providing safe locations where emergency workers can take custody of the child, get the infant checked out and delivered to the custody of the Department of Child Services to find a safe, permanent home.

The Indiana Safe Haven Law enables someone to give up an unwanted infant anonymously without fear of arrest or prosecution. As long as there are no signs of intentional abuse on the baby, no information is required of the person leaving the baby. However, any knowledge of the date of birth, race, parental medical history, child’s health or anything that would be useful to the child’s caregiver would be greatly appreciated.

The town is prepared to accept an infant at the Edinburgh Police Department on Main Street or Fire Station 1 on Walnut Street.

Cummins announced today that it is acquiring Meritor in a deal worth about $3.7 billion dollars.

The Columbus-based engine manufacturer said that Meritor is a global leader of drivetrain, mobility, braking, aftermarket and electric powertrain solutions for commercial vehicle and industrial markets. Cummins will pay $36.50 for every Meritor share.

“In addition, our communities and our planet depend on companies like Cummins to invest in and develop these solutions,” Linebarger added. “This acquisition adds products to our components business that are independent of powertrain technology, and by leveraging our global footprint we expect to accelerate the growth in Meritor’s core axle and brake businesses. There is also a compelling financial case for this acquisition, with significant synergies expected in SG&A, supply chain operations and facilities optimization.”

Meritor’s history goes back more than 110 years and the company is based in Troy, Michigan. The company has more than 9,600 employees.

In 2000, Meritor merged with Columbus-based Arvin Industries to form ArvinMeritor. Although billed as a merger of equals, the company began folding its Columbus operations, closing plants and facilities. 11 years later, the company dropped Arvin from the company name. Former Arvin facilities include the current Bartholomew Consolidated School Board headquarters building on Central Avenue, the Doug Otto United Way Center on 13th Street, factory space on 17th Street, as well as the plant on Gladstone operated by Faurecia.

You can read more about the Cummins/Meritor news here.

You can read more about the history of Arvin Industries here.

The National Weather Service has added Driftwood River to local waterways expected to see minor flooding due to the heavy rains. A flood warning is in effect for the river at Edinburgh from Wednesday night to Friday afternoon.

The river is expected to crest at about 11.8 feet Thursday morning. That’s about nine inches above the minor flood stage.

The agency has also issued a flood warning for East Fork White River in Seymour through Saturday evening. Minor flooding is forecast.

The river is expected to go into the lowest flood stage tomorrow morning and to crest at about 15.5 feet by Thursday, about a foot and a half below the moderate flood stage. The river should drop back below the flood stage by Saturday morning.

A flood watch remains in effect for the rest of our area, with runoff from heavy rain causing flooding in low-lying and flood-prone locations. Up to an additional inch of rain is possible. The flood watch expires this evening.

According to police reports, officers noticed a woman run into a home in the 1500 block of Chestnut Street at about 6:20 p.m. Monday evening, then exit the home, running westbound on 15th Street.

When she saw officers nearby, she began quickly changing directions and running in the opposite direction. Despite being ordered to stop, she continued to run from police before being detained a short distance later.

The woman was identified as 33-year-old Lindsey P. Smith, of Taylorsville who was wanted on an outstanding Bartholomew County warrant.

Smith was arrested on preliminary charges of resisting law enforcement as well as the outstanding warrant.

A Shelbyville woman accused of abandoning her 5-year-old nonverbal autistic son in a wooded area near Cincinnati Thursday is expected to appear in a Kentucky court today.

32-two-year-old Heather Adkins was arrested Saturday after police were called to a Georgetown, Ky. gas station where she had reportedly been banging on car windows. Authorities are working to extradite her back to Ohio to answer the abandonment charge.

Police say she admitted to abandoning the boy to “save him” from her. She’s due to be taken back to Ohio to face charges.

Heritage Fund – the Community Foundation of Bartholomew County recently distributed $247,500 from the Community Fund to local nonprofits as part of its fourth-quarter grants cycle.

Through the generous support of community members, HFBC annually distributes approximately $600,000 to $700,000 in grants to local nonprofit organizations.